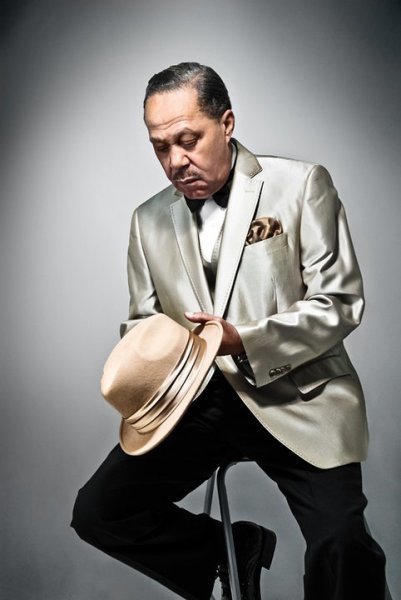 By Cassie CJ Fox
Southern Soul-Blues Music and Radio lost a huge fan and supporter,this past October 12.and his name was Kenny Hamilton. Kenny fought and lost his recent battle with cancer. Known in his hey day as "Montreal Kenny" to the people and press of Montreal Quebec, Kenny was an outstanding Rhythm and Blues Vocalist, who was remembered on vinyl and live performance,for his strong,rich voice,his intense and emotional delivery style. Kenny,born in Dayton,Ohio,started singing professionally at age of 10. In the mid-Sixties he moved  to Montreal to embark in the Soul ,and Music theater scene. He was a main stay and the iconic Esquire Club, in Montreal,where many touring American Soul, Rhythm and Blues acts performed as it was the hot spot for gritty soul rooted in American Southern sounds. Kenny was also known in Montreal and other provinces for his friendly,likeable persona,his warmth,easy going personality and sense of humor. Some of his entertainment peers and friends refer to him as the "Gentle Giant In The Canadian Music Industry for being an honest,approachable man,with good intentions"and for being a loyal,true friend,to so may.
Being the all around entertainer he was,Kenny also starred in Montreal's musical theater version of the musical " Hair " as well as guest roles on television and radio.
Kenny stated that his singing chops and style was heavily influenced by American music,rooted in the church,gospel and blues, that were mainly recorded in the Southern United States. At age 14, he said he heard for the first time,the crystal 50,000 watt clear channel AM radio signal from station WLAC in Nashville,  where nightime on-air personality  known as "John R" John Richbourg, played Soul,Rhythm and Blues,sponsored by several record stores. Hearing vocalists such Otis Redding,Percy Sledge,O.V.Wright,Bobby Blue Bland,Wilson Pickett,Ray Charles,Johnnie Taylor,Ollie Nightengale for the first time,Kenny was hooked on the authenticity,emotional urgency in the singers voices,along with their Southern Accents. In recent years,Kenny said he was "Thrilled to find internet and streaming radio where I Can  listen to my beloved Southern Rooted Music." He stated "I Love Everything about Southern Soul Music from the classics to the current newbie younger artists Of Southern Soul-Blues.He added" The dance and party jams to the ballads,I cannot get enough" He loved it-the Southern Music and Culture,so much, he joined The Boogie Report and WMPR-FM's website profiles.
Kenny was inspired by the recent sounds and in the last two years,he made trips to the studio, where he laid down vocals with other artists for group gospel songs and soul.R&B.His final recordings ,were made within the last three to four months, between his routine of rest, medication changes,doctor visits,as the cancer took it toll on his body and voice. His final recording,"Knockdown" a soul mid tempo,epitaph as some call it. The vocals were recorded his his hospital room, surrounded by his wife Dale,his family and friends just hours before he left for his final journey. We Thank Kenny for loving and supporting American Southern Soul Music,embracing Southern Culture,as we  send our prayers and best wishes to Kenny's family and friends.
E-mail me when people leave their comments –
Follow